Tweening in Bongo 1.0 was a bit of a hit-and-miss affair - while we provided the ability to smoothly animate between object and view positions with very little additional work, the power to change the way the tweening was accomplished between keyframes was limited.

In Bongo 2.0, we now provide detailed controls to adjust the way objects are moved between keyframes. In addition to the Bongo 1.0 parameters - bias, continuity and tension, we now provide linear and snap keyframing, custom tangent control and other forms of spline interpolation. There's also better easing.

Better still, using the curve editor, you can see exactly how your tweening parameters affect the path of an object or view - and you can edit it right there in the control.

Tweening in animation (short for inbetweening) is about creating frames between keyframes. Tweening in general would be something like defining transitions between different states.

In animation tweening happens with respect to time - or ticks. Keyframes specify the value of a parameter (in this example, the color) at a specifc tick and the tweening defines the value for the ticks in between the key frames.

As seen in the example above tweening doesn't have to be smooth. State can be stationary for a moment or there can be sudden discrete changes.

Bongo can tween both numbers and points. Tweening has no effect on keyframe ticks; only the ticks between them.

Bongo tweens numbers using Hermite spline interpolation. There are 3 different splines to choose from: linear, Cardinal and Kochanek-Bartels. Splines produce smooth continuous tweening between numbers. The fourth tweening method 'step' produces a sudden discrete change from one number to another.

Number tweening can be visualized with a curve graph that shows the tweened value for each tick. Dots present values at keyframes ticks. 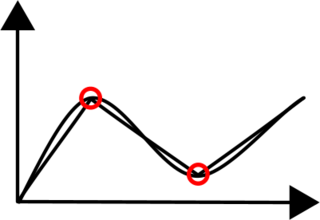 Highest tension is 1, it results in straight lines between keyframes and sharp turns over them. The curve looks like a tight fishing line. The smaller the tension is the straighter the curve crosses keyframes. Curve starts to look more like a  loose hose. Lowest tension is -1, it often makes the curve look a bit over relaxed.

Kochanek-Bartels spline is a generalization of Cardinal spline. It gives two more parameters to adjust the curve, these are bias and continuity.

Bias adjusts the position of the bend along the curve. Bias of zero keeps the bend centered at the keyframe. Negative bias moves the bend before and positive after the keyframe.

Easing levels the curve before keyframe. Easing can be used to stop motion smoothly and to keep objects still between identical keyframe points.

Same curve without easing, with auto-ease and manual full ease:

When easing is set to one the curve crosses keyframe horizontally.

When tweening rotation angles and scaling factors component-wise tweening is used. This means that each component x, y and z are tweened as numbers - each forming its own curve. This type of tweening is used for position too when 3d tweening is switched off.

Another way to tween position is to use 3d tweening. Position is then tweened in two steps:

Having troubles seeing any difference between the tweening settings?

The most common reason is because there's only two keyframes for the animated object/view. If you only have two keyframes Bongo is not able to smooth out the movement. See image below: 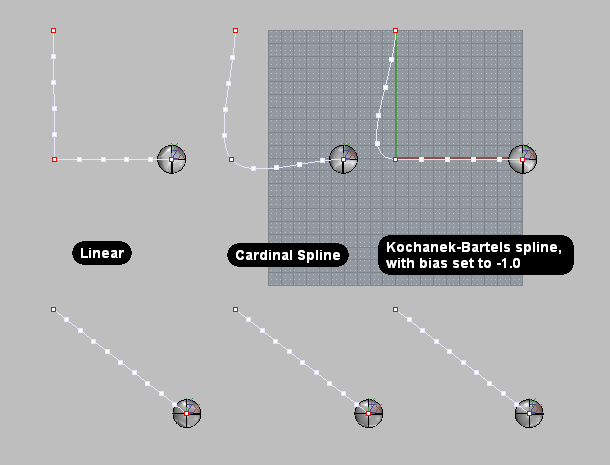