Certain types of animations require some elements to repeat while the animation plays. This is achieved with looping.

Example uses for looping include pistons that run while the camera moves slowly around the engine or an object that moves backwards and forwards on a track.

When looping is enabled for an object and that object is selected, two red looping markers appear on the timeline.

The right-most marker is the end marker. The end marker determines where the loop ends. After hitting the end marker, the object will return to the position specified by the start marker.

A white outline version of the timeline current tick indicator appears for selected looping objects. This shows which tick is determining the properties of the object given the current looping values for that object. 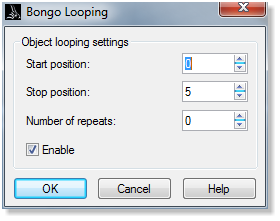 To set up object looping

To set the position and number of repeats

An object’s children inherit looping unless the child object itself has looping enabled. You can prevent an object from inheriting looping by clearing the Inherits Looping checkbox in the Advanced Hierarchy Settings dialog box for the object or one of the object’s parents.