Command: "Options" - switch to "Bongo" on the Document Properties. 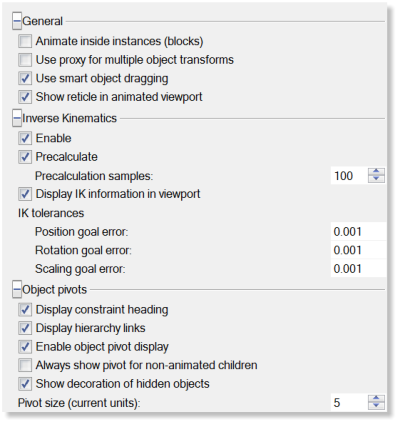 Governs whether animation data on objects inside instances (blocks) will be animated. This can be rather slow, so this is off by default. Using this option, it is possible to create animated blocks that can be reused in the model. More info about this feature here.

Use proxy for multiple objects transform

When multiple objects are transformed in animate mode, they each receive their own pivot and transform around this. This can be counter-intuitive in many situations, especially when using groups.

Using this option, Bongo will create a point object (a proxy point) and link all of the transformed objects as children to this object. The transformation will then be applied to the proxy instead of the children.

A good example of a use for proxy objects is animating a group. In Rhino, a group is not a single object, the objects simply all select together. This can create problems when animating a group because each object in the group receives its own pivot and transformations act around that.

Features in Bongo that aid in setting up proxy situations include:

Despite these features, groups can still be cumbersome to animate in complex models. In these cases, we recommend using Rhino blocks to create a single object from a group before animating.

To create a pivot for a group of objects

Looks at the object selection set while dragging and recording a keyframe to see if the movement can be reached by applying the keyframe only to a parent instead of the whole selection.

By default, Bongo displays information inside animated viewports including the center of the view, the view aspect and the current slider position.  Turn the display of this information off with this option.

By default, Bongo precalculates the IK chain every time you make a change to it. Turn the precalucation off with this option.

Determines how many samples are calculated before solving an IK case. More info from here.

By default, when an IK chain is created Bongo the join types are drawn in the viewport. Use this option to enable disable these markings.

Specifies how accurately IK motion constraints are adhered to.

Specifies how accurately IK rotation constraints are adhered to. The rotation tolerance is absolute. More info from here.

Controls the display of the Constraint Heading Indicator.

Parents are linked to their children by dotted lines between their pivots.  Use this option to enable or disable these lines.

Controls the display of object pivots for all animated objects.  Object pivots can also be turned off on a per-object basis using the command “BongoPivotDisplay”

By default, children with no animation data do not display an object pivot.  This option enables pivot display for these objects. Plays the preview in a continuous loop. When this checkbox is cleared, the preview will stop at the end of the animation limits.

Changes the direction of the animation during preview.

Controls the amount of time it takes the slider to move from the start extent marker to the end extend marker during animation preview.  Does not affect output to video – see “Bongo Render Animation Dialog” for more information on  controlling the output speed. 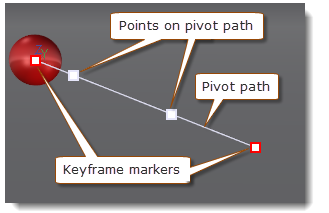 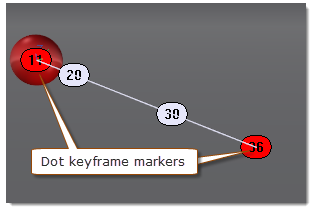 Determines how often points/dots are drawn on the paths.