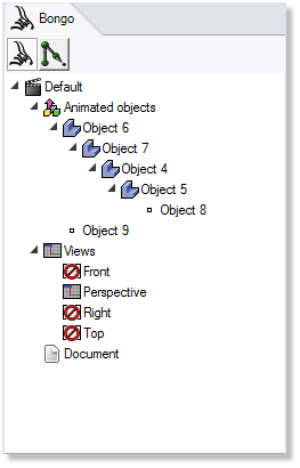 Animated objects can have parents and children. This is displayed in the Animation Manager on the hierarchy tree. Each object is either the child of the Animated Objects item or the child of another object. When an object is the child of another object, it is also transformed by the transformations applied to its parent in addition to its own transformations.
For example, if a car is animated moving in space, the four wheels can be made children of the car by dragging the wheels onto the car object in the Animation Manager (or using the BongoSelectChildren or BongoLinkChain command). The wheel objects will now move with the car and stay in the correct place. Rotation can then be applied to the wheels by selecting them and using the transformation slider to rotate them around the correct axis. They will then move with the car (using the parent’s transformation) and rotate around their own axes.
When a parent/child relationship is in force between two objects, the objects are linked in the Rhinoceros viewports by a dotted line.
Parent/child relationships can be stacked to any depth—objects can have grandchildren, great-grandchildren, and so on. Children of the same object are called siblings.
When creating a parent/child relationship with the BongoSelectChildren command, you have the option of snapping the child to the parent. The SnapIntoPlace option moves the child object’s pivot through the same transformation as that currently applied to the parent. If SnapIntoPlace is not used, the child object will not move during the operation.

Use Proxy Objects as Parents

A proxy object is a Rhino point object whose purpose is to control other geometry by acting as a parent object. Proxy objects are sometimes called controller objects.
When several objects that have the same proxy object as their parent are transformed in animate mode, the transformation is applied to the parent proxy object rather than the selected objects. The same is true if children and their parent are transformed—only the proxy object will receive the transformation keyframes.
A good use for proxy objects is animating objects grouped with the Rhino Group command. In Rhino, grouped objects are not a single object, the objects simply all select together. This can create problems when animating a group because each object in the group receives its own pivot and transformations act around that pivot.
Animating groups of objects in complex models can be cumbersome. In many cases, it is a good idea to use Rhino blocks to combine multiple objects into a single object for animation instead of using groups.

To create a single pivot point for a group of objects

Now the Proxy Point is the parent of all the boxes, and therefor it controls them.
If we select the proxy point and add rotation to the z-axis, the boxes will rotate like a propeller around the proxy point.

Link the parts together

When you have a model that includes many connected parts, you can set up parent/child relationships between objects. Parent objects control their child objects. This lets you animate the parent object in the assembly and the child objects will move in relation to the parent. Now we would like the whole Toy to move and that the wheels would roll at the same time.

If you press play, you can see that only the body moves. Next we will make all the other objects children of the red body, so that they follow along.

The rest of the pull toy should now start to move with the red body object.

Adding the rotation to the wheels, we can do both the front and the back wheels at the same time.

Now we should have a toy car that move forward. Click to play example video: